A message to my mother. 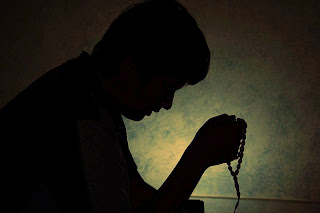 I visited ur grave today. I wanted badly to 'see' u although I know I couldn't talk to you..I just want to say something silently in my heart. But eventually i know only God would hear it. It was sad to leave Abah just now. Staying with Abah for two days was 'something' to him. I could tell it from the conversations that we had together during the course of days.  Abah was happy and laughed a lot. He told me and the kids that he's happy we were there with him. He even wanted Asyraf to continue staying with him. But of course he couldn't...he's still studying.
Mak, I was wondering if ur son-in-law would feel the same way like Abah if I were to leave the world first.
Abah is such an independent man but he still needs a company..Mak, please forgive me...I need to help Abah. I need to do something to ease the pain. It's so difiicult, Mak...I feel like I don't have enough courage to do it but I have to force myself anyway...

Mak, life is not always glorious right? There are so many things popped out of my head lately...my responsibilities, my needs, my desire, my family, my patience...oh Mak, I 'm trying my best to be a patient person like u. U could really tolerate Abah to the highest level. Mak, I don't cry for you anymore but I still long for you.

Everybody has his own story....

Posted by tearose at 2:45 AM No comments:

It started with Friday...The Language Camp. 8am till 5.30pm. A  break in between for solat.  The Pengarah came to officiate the programme...well, at least he showed some concerns.

I got to be a fascilitator this time. Before, I was the AJK and the Coordinator. My group is called Ben Ten (Group Ten). I was not very sure what to do with them at first. I felt a bit akward because none of my student was in the group. But I managed to smile and kept on talking and talking until everything is at ease. Luckily they were a bunch of students who easily adapted to each other's profile. Then, they created the cheers, flag and logo for the team (got 3rd place in the competition...not bad at all!)

Nothing much to say about the language camp this time as it happened only in a day. Last time it used to be 3 days and 2 nights affair. Very limited budget it seems. However, my colleagues made some efforts to keep the spirit high. Naza bought some nasi lemak for me and others. 'Teh Tarik', complimentary from Shah...'Cucoqs' from Kak Yan...and so, we sat at the round table and had a good morning chat while having the breakfast...team work, right?

Despite the heat, I admitted that I had a few good laughs with the contestants of Spell It Right competition (I was also handling this contest with Liza). A lot of actions and body gestures were seen as they were trying to figure out the correct spelling of the word. Some of them could not even spell easy words like 'fanciful', 'schedule' and 'happiness..' but some were able to spell difficult word like 'procrastination' (sounds familiar?).
This competition was the last to finish because at times we cracked some jokes with the students.

I left the hall right after I got the token of appreciation from Mr Ash...and, at home some relatives were waiting for me. They came all the way from Baling to visit me and my family. We had a long conversation at home and continued at a Thai restaurant when my hubby treated them with dinner. Before they left, I kissed and hugged ' Makcik' tightly.. Felt like crying. Felt like  she was my mum...

It was around 10 pm when they left Jitra. We also went straight back home after that. i had my bath and began to feel so comfy and sleepy after that..So, I  just jumped on the bed and slept like a baby till 5 am...
As soon as I woke up, I turned on the computer and do my assignment which is due TODAY.

And TODAY...I had my Masters classes from 9am till 5pm with 2 breaks in between. It was a long and tiring day for me  as after the classes I had to go  to the Night Market (pulak....) with Amirah to get some provisions for home. By the time we reached home it was already dark.... (macammana tak letih...)

Good night everyone! I need a good night rest now.

(Will be seeing students as early as 8 am tomorrow morning..8 more hours to go!)
Posted by tearose at 12:27 AM No comments: 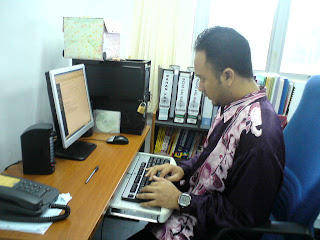 Ikmall- at another friend's PC, getting permission to go out
Ikmall   is also an English lecturer in KMK. He was just tranfered from KMKJ this year. We are not that close to each other but we always have our morning breaks or breakfasts together with other members of the unit. And Ikmall always has jokes or stories to tell especially about his students. However, last Sunday he was 'the story' of his students...
Ikmall got mad at his students that morning. I was in the classroom, just 1 door from his. He was sitting on the table of  a classroom with lights off and he was shouting.  It was so loud that it scared many people around including me. I thought it was another'hysteria'. When the class ended I left the classroom and went back to my cubicle. As I was entering the unit, I saw Ikmall. I asked him whether it was him who shouted in classroom just now and he said yes..I told him that it was scary and he just laughed.
Actually, I seldom see any male English lecturer got 'mad' like Ikmall. When I got angry at my students I would just gave them some 'wicked' words, just left the students in the middle of the class and let them feel guilty or wonder what is happening to their teacher...After that the whole day would be like SHIT!
Today, Ikmall had to leave work early..before 9am...His pregnant wife was having a complication with his 3rd child...That's another thing with Ikmall...He may look young and trendy but  between work and family, the latter would always come first. It's a common thing lately to see him dashes out of KMK when he received 'not so good' news about his pregnant wife. How many men would do this to their wife nowadays? I've seen many of my friends who always go to the clinics for maternity check-up alone, without their husband.
Well, I hope everything will turn out well for Ikmall and his family. Then, we could all have breakfast again as usual with rest of the gang.. :))
Posted by tearose at 10:46 AM No comments: 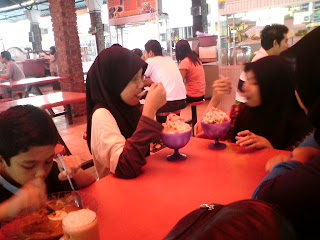 Eating out in Jitra with Zarif, Alin and Nuree.
Well...since I havent been writing 4 quite sometime, let me just say Hello first. Welcome back! Just sent my nieces back to KL....they went back by MAS...I tried very hard not to cry but the tears couldn't wait to be rolled down my cheeks...I missed them as soon as they disappered behind the walls...Come back again Nurin, Alin Zafri....Mak long will prepare better activities next time..
Posted by tearose at 9:39 PM No comments:

tearose
Proud mother of 6, likes to be different and quite an aquarian in character.

People laugh at you because you're different,
You laugh at them because they're all the same.